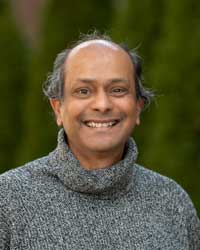 Chair of the Division of Management and Education
Professor of Economics


Division of Management and Education

Gajanan is known on campus for his great way of breaking down complex problems without watering them down. He has been interviewed by The Pitt News and WPSU and served as a Pitt expert during the G20 Summit in Pittsburgh in 2009.

Most recently, he's been explaining complex economic issues like trickle-down-economics and Bitcoin to area residents via WESB and The Bradford Era.

Administratively, Dr. Gajanan has served as the chair of the Division of Management and Education since 2013 and has been reappointed for a new four-year term and is the program director for the economics program.

He has been a faculty liaison and advisor for the Pitt in India Study Abroad program in 2007 and 2016 and has been instrumental in fostering an exchange relationship with Heilbronn University, where he has taught twice.

Gajanan teaches microeconomics, Economics of Energy and Environment, Economics in the Modern World, and International Food Security and Policy.

Gajanan is co-author on two books on nutrition economics and has recently worked on studies conducted with fellow faculty members for the Center for Rural Pennsylvania on two very different topics: how Marcelleus shale impact fees are accounted for in Pennsylvania and the Commonwealth's potential for growth in the area of viniculture.

He has also spent significant research time in his native Tamil Nadu (formerly called Madras) working with graduate students at his alma mater, the University of Madras, to study the cost-benefit of vaccinations in advance of breakouts of diseases such as chickungunyu and to study how local corruption affects electrical rates and water depletion.