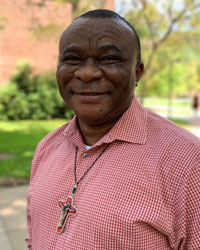 Dr. Ezeihuoma has academic and professional background in the field of criminal justice. He was a former high school teacher/Vice-Principal in all boys’ school and a parochial vicar of various catholic communities here in the United States, and in Nigeria for over ten years. He has certification as Juvenile Supervision Officer (JSO) and Youth Development Coach (YDC) by the State of Texas Juvenile Justice Department (TJJD). Consequently, he worked for five years in Harris County Juvenile Probation Department (HCJPD), Houston-Texas; where he was helping at risk youths who have troubles with the law.  He undertook his graduate studies and earned both Masters and PhD in Administration of Justice. In addition, before he joined University of Pittsburgh-Bradford family; he served for a few years as an Adjunct Professor in the Department of Administration of Justice at Texas Southern University, Houston-Texas.

Dr. Ezeihuoma has some of his publications in the areas of his academic focus which includes Terrorism, Restorative Justice, Juvenile Justice, Race and Crime, Policing, etc. He is fluent in English, Igbo (native language), Spanish and he has working knowledge of French, Latin etc. He is an ardent sports lover especially soccer, a Chelsea Football Club fan.