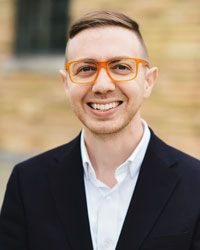 Michael Davila was named Pitt-Bradford’s next vice president and dean of student affairs in April 2022. Michael, who began at Pitt-Bradford in May 2022, also will serve on the President’s Cabinet.

Michael brings a depth and breadth of experience in the student affairs area. Most recently, he served for three years as associate vice chancellor and dean of students at the University of Arkansas at Monticello where he oversaw intramurals and recreation, student programs and activities, residence life, counseling services, student conduct, and student health services and wellness.

In addition to having experience in what are considered the traditional aspects of student affairs, Michael has provided leadership in other areas, including academic advising, student success and retention, tutoring, and Title IX.

Before arriving at the University of Arkansas in 2019, he served for three years as the assistant director of student engagement, enrichment, and development at Austin College in Sherman Texas, then spent four years as the dean of students at Navarro College in Corsicana, Texas.

Michael anticipates receiving his Ed.D. in higher education leadership from Texas Christian University this fall. His dissertation is “The Emotional Labor of Student Affairs Work.”