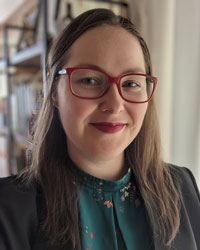 Katie to those who know her, she obtained her B.A. in Human Relations (an interdisciplinary major consisting of Anthropology, Sociology, and Psychology), with minors in Anthropology, Spanish, and International Studies, from the University of Pittsburgh at Bradford in 2012. As one of three children of a single mom, she grew up in a household where everyone pitched in to accomplish what was necessary, stoking a personal interest in gendered labor. As a child, my grandpa shaped her love of history/anthropology, her mom encouraged her yearning to travel, her community taught her generosity, and all of these united in her dissertation project studying gendered labor in a small, indigenous community in Ecuador. The idea for her project originated during her first trip to Ecuador in 2009 as an undergraduate research assistant, but it feels like the culmination of a lifetime of experiences.

Zapel's research interests include gendered labor and craft production as part of cottage-style economies among the Otavaleños, an indigenous group of weavers in the Andes Mountains of Ecuador. In this region, households function as units of production, with tasks broken down along gender lines. Typically, women are considered secondary workers and do not weave the textiles that make Otavalans famous; however, they are generally responsible for selling these textiles in the market, since sales are considered to be social interactions. Increasingly, young, married women are traveling abroad with their husbands because of their supposed talents at making sales. Thus, women’s roles and the value of their market knowledge are of particular interest. Much has been written about gender in the Andes, specifically analyzing the presentation of indigeneity among women. In short, she is interested in the gendering of tasks, especially how women’s roles are determined, and the political economy of crafts. Her research takes an economic anthropology approach to look at the marketing of identity.