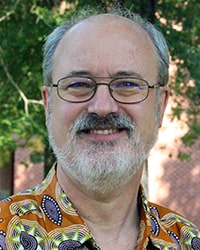 Dr. Ulin has published scholarly articles on 19th-century literature and tourism, on film studies, and on the teaching of literature. His current research is on the correspondence of immigrant Quakers in Ohio in the 1840s. Dr. Ulin splits his time between his camp and maple-syrup farm outside of Bradford and his city home in Olean, New York. On a good day, he enjoys being outdoors or at home with a good book or movie on the rainy days. He also enjoys traveling and has lived in Scotland, Japan, and Botswana and has traveled through many parts of the world and the United States. He loves meeting students and hearing about their interests, so stop by and say hello any time.

Dr. Ulin began teaching at Pitt-Bradford in the fall of 1998. He teaches British Literature, Literature and the Environment, and literary theory courses as well as various general education literature courses.