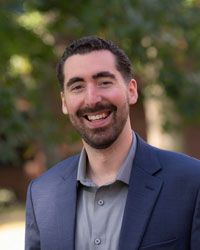 He can also be seen around campus doing photography for the university and has won several state awards previously as a photojournalist at The Bradford Era.