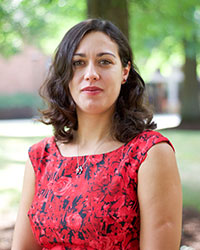 
Division of Physical and Computational Sciences

Since she discovered the fascinating world of paleontology in her second year of college Dr. Franţescu was attracted to it immediately. She has been interested in the invertebrate organisms and how they can provide us with clues of the past.

One of the most interesting studies she has done, except for her decapod research, was focused on the morphological reconstruction of the Macrocystella genus, Lower Ordovician in age, based on a collection from Morocco, housed at the University of Burgundy, Dijon, France.

In the future, She plans to concentrate her research on invertebrate fossils, the environments they have lived in, their taphonomy, and depositional setting, and how invertebrate fossil can help us answer other questions related to sedimentary basins.

Dr. Adina Frantescu tells us about the Romanian tradition of Mărțișor, a celebration of the beginning of spring.

My research is concentrated on systematics, taxonomy, and taphonomy of fossil decapod crustaceans. The first thing I see when I look at a rock are the fossils. I've been doing field work in Romania, France, and USA mostly based on paleontology.

Included among the courses I have been teaching: